Pharmacist is Having the Time of His Life

Pharmacist and pharmacy owner Terry Higgins says he been waiting for this moment since he graduated from pharmacy school.

“I am having more fun than I have every had,” says Terry, 49 and the youngest of five.

When Terry was in Grade 11 his older brother was a representative for pharmaceutical company Boehringer Ingelheim and had the opportunity to visit a lot of pharmacies.

“After talking to my brother, I quickly realized that pharmacy would provide a rewarding career,” says Terry.

While at university, he says learned a lot about the best therapeutic options and he felt that things like pharmacists prescribing would be just around the corner. It took a bit longer than he anticipated back at university, but he was ready and eager to start doing more for his patients.

“I didn’t think it was going to take so long,” says Terry.

Before venturing in to pharmacy ownership, Terry had a varied pharmacy career, starting as a hospital pharmacist at the old Sydney City Hospital and then transitioned to the much larger Cape Breton Regional Hospital. He also moonlighted in community pharmacy. During this period earlier in his career, Terry felt that he was able to practice in a more clinical setting than a community pharmacy.  He also spent time working with pharmaceutical company Merck Canada in various sales and marketing roles.

“Flu shots was the catalyst for the expanding scope of practice for pharmacists,” says Terry.  “It really started to show patients just how much more we can do for they and that we are a vital part of their healthcare team.”

“We had a very successful first year with flu shots,” he says. “We were well prepared, well supported, and the service was fully embraced by all members of the pharmacy team. And we received overwhelmingly positive feedback from our patients. Patients who had never, or rarely, got the flu shot were getting it.”

He and his pharmacy team quickly expanded to providing travel and shingles vaccines.

The more he can do for his patients, the better for Terry. However, he says he has to know that his team will be able to do any service they provide well.

“We don’t jump at everything,” he says. “I look at what value it will add. How many patients we can help.”

One such service that has been providing a great reward for patients, pharmacists, and physicians is the Community Pharmacist-led Anticoagulation Management Service (CPAMS) for warfarin patients.

“Patient feedback has been amazing,” says Terry. “The patient bonds developed have been incredible.”

One of the first steps in getting the CPAMS program off the ground at the pharmacy was to reach out to all the physicians in the area. Terry credits his experience working with Merck as helping him being so successful in getting physician support for the interdisciplinary collaboration. He says the face-to-face meetings were the key.

“I felt comfortable reaching out to physicians. I either booked an appointment or dropped in,” Terry says.

He recalls one physician who he couldn’t get to return his calls but that didn’t deter Terry.

When the physician called the pharmacy to call in a prescription for a patient, Terry convinced him to give him two minutes of his time during the call to tell the physician about the project.

“It’s not a turf war,” says Terry. “It’s about getting the right healthcare professional, for the right condition, at the right time. We all need to work together to lessen the burden on the healthcare system an insure patients are getting the best possible.”

He also thinks that pharmacists can do more to help patients manage their chronic diseases, like hypertension, similarly to how they are helping their patients on warfarin. Terry feels confident that pharmacists would follow-up to get patients “to target” and for them to achieve positive health outcomes.

With the help of his pharmacy manager, Jeff MacNeil (who played an integral role in the successful implementation of the CPAMS pilot), pharmacists Stacy Billard and Michelle Andrea, and the rest of his pharmacy team, Terry is looking forward to being able to do even more for his patients.

Being able to offer services such as CPAMS provides pharmacists with the opportunity to better get to know their patients and often they discover other health concerns that can be addressed by the pharmacist.  For example, Jeff (who is a who Certified Diabetes Educator) discovered one patient had classic symptoms of diabetes during an CPAMS session and encouraged her to see her physician.  It turned out that she indeed had the disease and they were able to help her at the pharmacy better manage her health.

“It’s nice to be part of the solution,” says Terry.

He’s favourite thing about being a pharmacist?

“The instant you know you’ve made a difference,” he says.  “Sometimes it’s a call from a physician, sometimes it’s with a patient.”

Terry is excited about the future of pharmacy.

“If you think the last two years has been exciting, the next two or three years will be even more exciting,” he says. 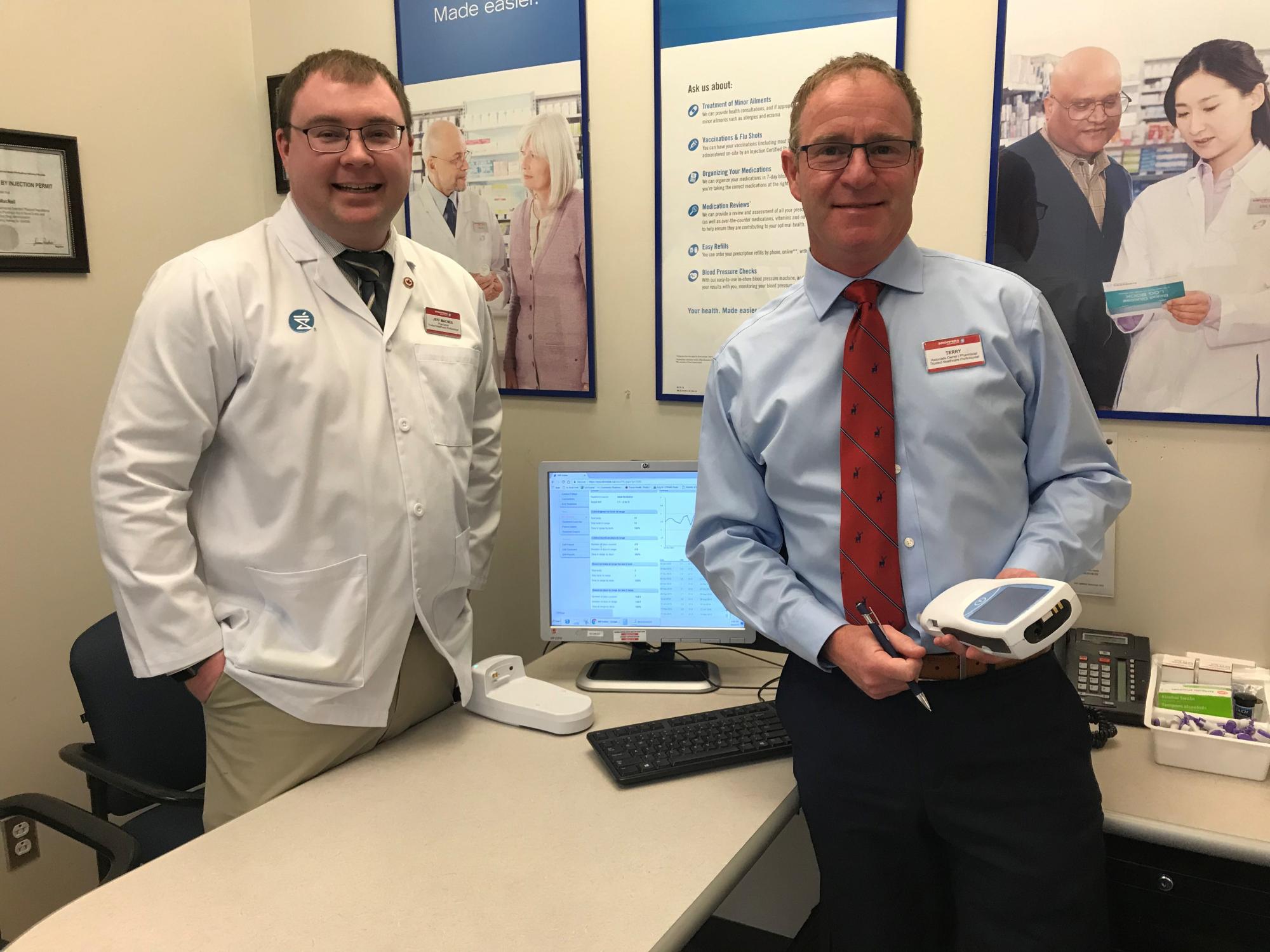