Pharmacist Devoted Past Ten Years to Expanding the Practice of Pharmacy

While many students can become narrowly focused on their studies, as a student Craig Connolly was able to see a bigger picture. From that time on, the past ten years, he has been involved in expanding the profession of  pharmacy through his extensive work with the Nova Scotia College of Pharmacists (NSCP), the organization that licenses and regulates pharmacists, pharmacy technicians, and pharmacies in Nova Scotia.

Craig decided to pursue a career in pharmacy after already having a successful career in retail. Serving as an Assistant Front Store Manager at the Lawtons at the Halifax Professional Centre, Craig felt he could do more.  The Pharmacy Manager at the time, Karen Zed,  encouraged Craig and gave him the confidence to return to school in his thirties. He was able to use his life experiences to see the potential contributions pharmacists could make for their patients, community, and the overall health care system. Rita Caldwell, the director at the time of the Dalhousie College of Pharmacy, saw something in Craig too and suggested that he run for a seat on the counsel of the NSCP while he was still a student. Over the next few years, Craig rose through the ranks of NSCP's governance body to eventually be elected President of its Council and the Chair of NSCPs Standards of Practice Committee.

"I was surprised how easy it was to make suggestions," says Craig of his time at NSCP. "It was not an old boys club at all." The NSCP staff and volunteers were open to change, which became evident over the next few years.

Craig has served during a time which has seen the biggest change in the practice of pharmacy in the profession's history.

"When I started at NSCP there was a debate over whether or not pharmacists should write for [diabetic blood testing] strips; now we are writing prescriptions," says Craig. The laws and rules that permit pharmacists to assess and prescribe for 31 ailments were developed and passed during Craig's tenure.  Such substantial changes to pharmacists' scope of practice required new Standards of Practice, the guiding document for pharmacists, to be developed. Craig lead the way as he chaired, and continues to chair, the committee responsible for creating these important documents.

Pharmacists were also finally granted the authority to immunize Nova Scotians during Craig's time at NSCP.  Pharmacists' involvement in the publically funded flu shot program has been a huge success.  During the first three years of the program, Nova Scotia's pharmacists administered almost 280,000 flu shots.

NSCP's primary responsibility is the protection of the public.  This is a responsibility that Craig takes very seriously. He says, the rules that are in place help pharmacists provide the best care possible and focus on the best interest of the patient. Added into the mix is a new regulated pharmacy technician designation that could provide more time for pharmacists to focus on their expanded roles. The regulatory framework is in place that will help pharmacists provide patient care to the full scope of their practice.

"It's a great time for pharmacy," says Craig. "It's challenging and we need innovators."

Craig also passes on his knowledge to future innovators in a Law and Ethics class he teaches at Dalhousie's College of Pharmacy and students gaining real life experience at the pharmacy he manages in Clayton Park.  He is also currently president of NAPRA, the National Association of of Pharmacy Regulatory Authorities.  Craig has stepped down from the council at NSCP but continues to serve on their committees. Perhaps he is making way for a new innovator amongst his students while giving himself time to work on other goals.

"Every class needs to push the profession further," Craig says. "We need to make time for that." 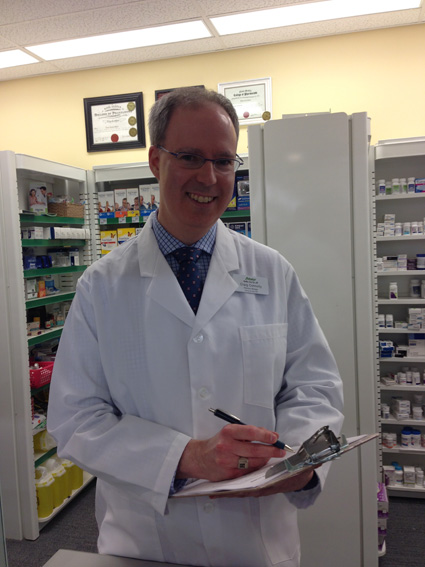