Pharmacist Helps Veterans Where They Live

Locals refer to it as Camp Hill Hospital, but its actual name is Camp Hill Veterans Memorial Building and it is a long term care facility whose current population includes veterans of World War II and the Korean War.  It is home to 175 veterans, mostly men. The average age of a resident at Camp Hill is 92.

As a student, pharmacist Melissa Gehrig knew she wanted to have a pharmacy career where she could have a direct impact on patient care with an opportunity to do research. She also loved geriatrics. When the position arose at Camp Hill, she jumped at the chance to help those who served their country.

As people age, their medication needs change as well.  Geriatric patients have some very unique challenges. Organs, such as the kidneys, work differently in the elderly. There is also something that is referred to as the "prescribing cascade" that Melissa frequently encounters.  This is when patients continue to be prescribed more and more medications, often to treat side-effects of those previously prescribed, without going back and re-examining the original medication. Also, medication needs and goals of therapy for a patient may change over a lifespan.

“Prescribing medications is a balance between risk versus benefit; and as we age, the balance may shift," says Melissa.

Some medications have different risks for the elderly compared to somebody in their 50s or 60s.  One of the examples Melissa uses is blood pressure medications.  If a patient is on one, there can be an increased risk of falling due to light-headedness from a low blood pressure.  Older patients may be frailer and the risks related to falling are much greater than in a younger patient.

Melissa has to weigh the benefits of medications versus the risks to the patient every day. Adding to the complexity is the large numbers of medications many elderly patients are on.

She and her coworkers at Camp Hill recently worked on a national Antipsychotic initiative to ensure appropriate use. One third of long-term care facilities have residents on antipsychotics without a diagnosis of psychosis. During the initiative, Camp Hill was able to decrease use of antipsychotics from 17% to 12% for all residents (with and without psychosis).

Through the initiative, it was confirmed that many patients were put on antipsychotics to treat symptoms of aggression, restlessness, or wandering.  Upon further examination, these symptoms were often caused by triggers such as pain, hunger, or loneliness.  For example, if a veteran was in pain during their daily personal care, it was not uncommon for them to resist or strike out. Once the pain was addressed with a different approach or medication, the veteran’s aggressive behaviour ceased and the antipsychotic could be stopped.

"Behaviour has meaning," says Melissa, and Camp Hill staff is continually asking, 'Why is it happening?'

One of the benefits of working with patients where they live is that the health care team members get to know the patients and their families.

"We really know the veterans and can often identify a change quickly," says Melissa.

She points out that there is a strong collaborative team at Camp Hill, between physicians, nursing and other allied health team members.

"It's really rewarding to be a part of team like this," says Melissa.

When she is asked to identify her favourite thing about her job, Melissa smiles.

"You can learn so much from the elderly, the experiences they have been through," she says. "Our veterans living here have literally been through the war.  It puts things into perspective and they have taught me some valuable lessons. In return, I hope to assist in optimizing their quality of life by ensuring appropriate medication therapy. " 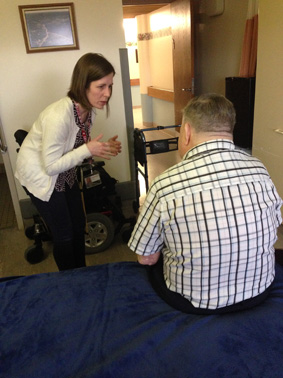